Skip the oven and make Crockpot Express Apple Crisp instead. The apples are perfectly cooked, creating a delicious sauce that’s covered up with a buttery oat topping. 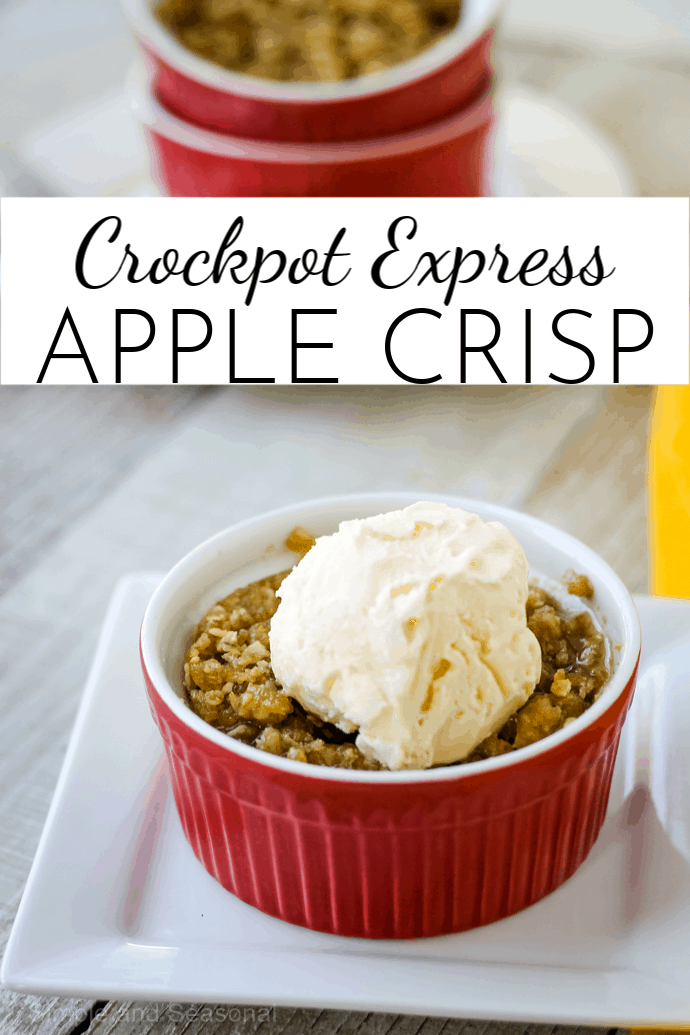 Every August, my Pinterest feed starts filling up with people’s dreams of fall. Apples and pumpkins, red and gold leaves, scarves and boots-you get the picture. We’re all dreaming of cooler days ahead while we swelter in the summer heat and pack the kids off to another school year. Apple picking season is just around the corner, and because it’s still too hot to run the oven, I decided to try Crockpot Express Apple Crisp. 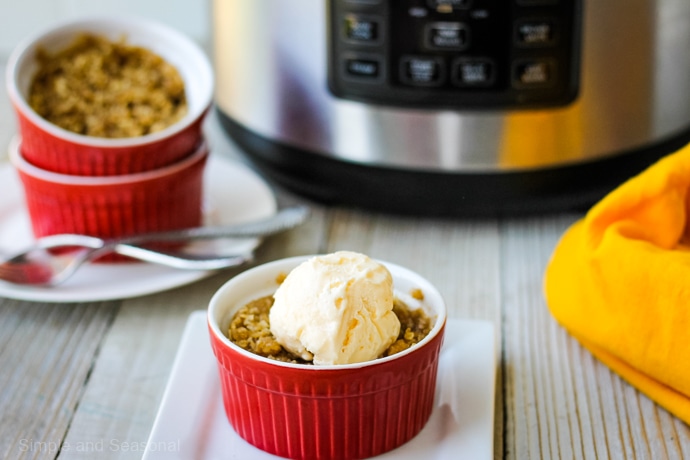 I’ve used my pressure cooker to make dessert many times this summer. It’s never going to replace actual baking in the oven, but it’s perfect for a quick sweet treat or when I’m trying to keep the house cool. (Actually , when it comes to cheesecake, it DEFINITELY has replaced the oven!)

Some of my favorite Crockpot Express dessert recipes: 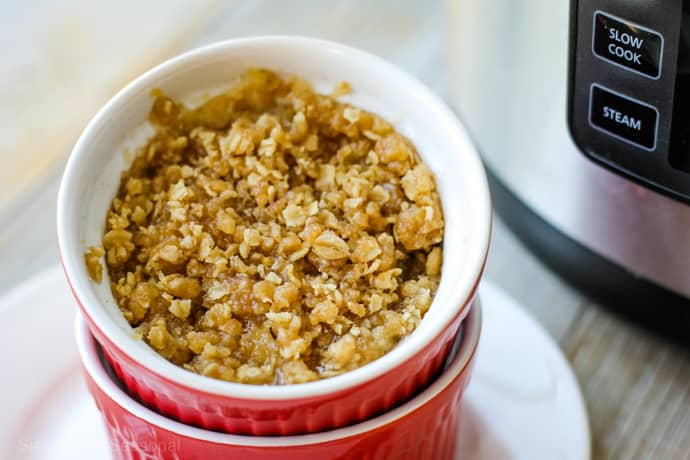 Can I make Apple Crisp directly in the pot instead of in a ramekin?

I tried making apple crisp in the Crockpot Express two different ways. First, I tried it with the apples directly in the pot. I mixed the apples, sugar and cinnamon together and put them on the bottom of the pot and then added apple juice (water would work, too.)

The very first time, I added the corn starch to the mixture like I usually do for apple crisp. Duh. A thickening agent is not going to work for you when you’re trying to avoid the E6 error. After eliminating the corn starch, the apple mixture worked fine directly in the pot.

I topped it with the crumble, careful not to get any on the edges where they could stick to the pot and give me an error. Then I cooked it for 2 minutes and did a quick release.

Cooking them directly in the pot, the apples get VERY soft. You have to use a hardy apple like Granny Smith and leave them cut into large chunks (about 1 1/2-2 inches.) It’s quick and easy, but I found it to be more like apple pie filling than apple crisp. The lovely golden crisp on top turns into a delicious oatmeal. Good, but not what I was going for. 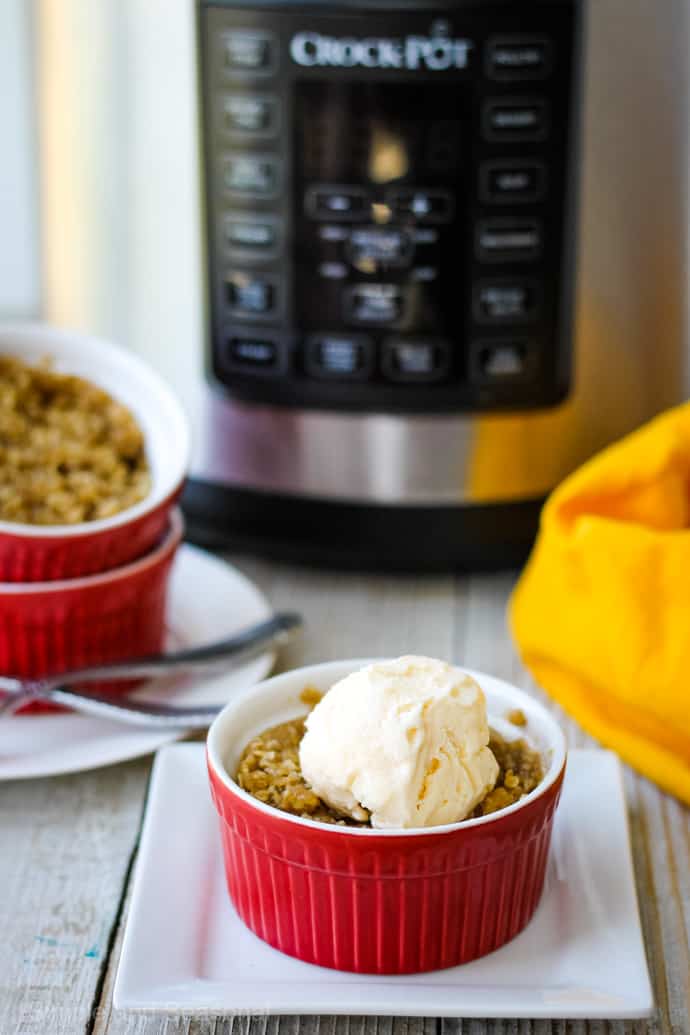 Second, I tried them in individual ramekins. Making Crockpot Express Apple Crisp this way provided a much better result. I used the same recipe as I use for my Easy Apple Cobbler. I don’t know why I called that apple cobbler, other than that’s what my mom always called it. It’s really a crisp. 🙂

Making it in the ramekins yielded cooked apples that still had a little bit of a bite and the topping stayed brown and crispy, rather than turning into mushy oatmeal. Besides, it’s so easy to serve this way! You could also make it in a large pot or bowl that fits inside the pot, but the cook time would need to be much longer. 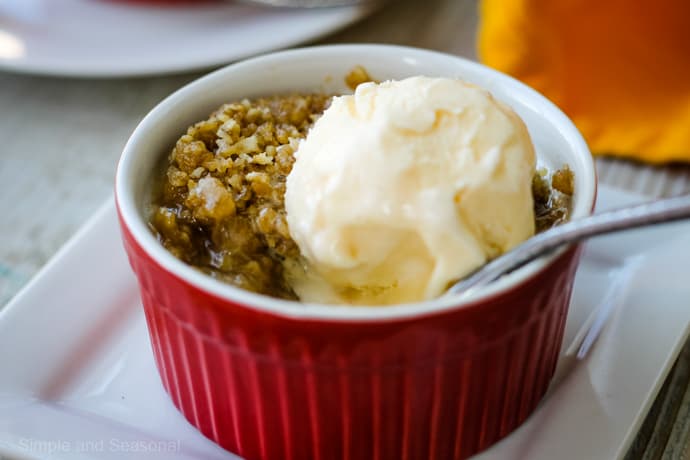 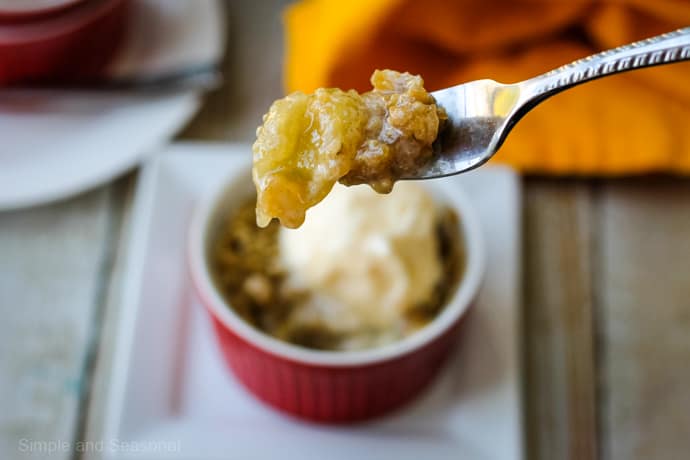 Don’t forget to top it with a scoop of vanilla ice cream! There’s something so yummy about melting ice cream running into warm apples and cinnamon. Mmmm…my mouth is watering just thinking about it. 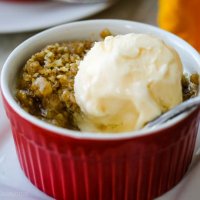 Add a dash of nutmeg and all spice to give it a warm "apple pie" flavor! If you like your apples really soft, allow a 5 minute NPR first before removing from the pot.

Don’t forget to pin this delicious apple crisp for later! 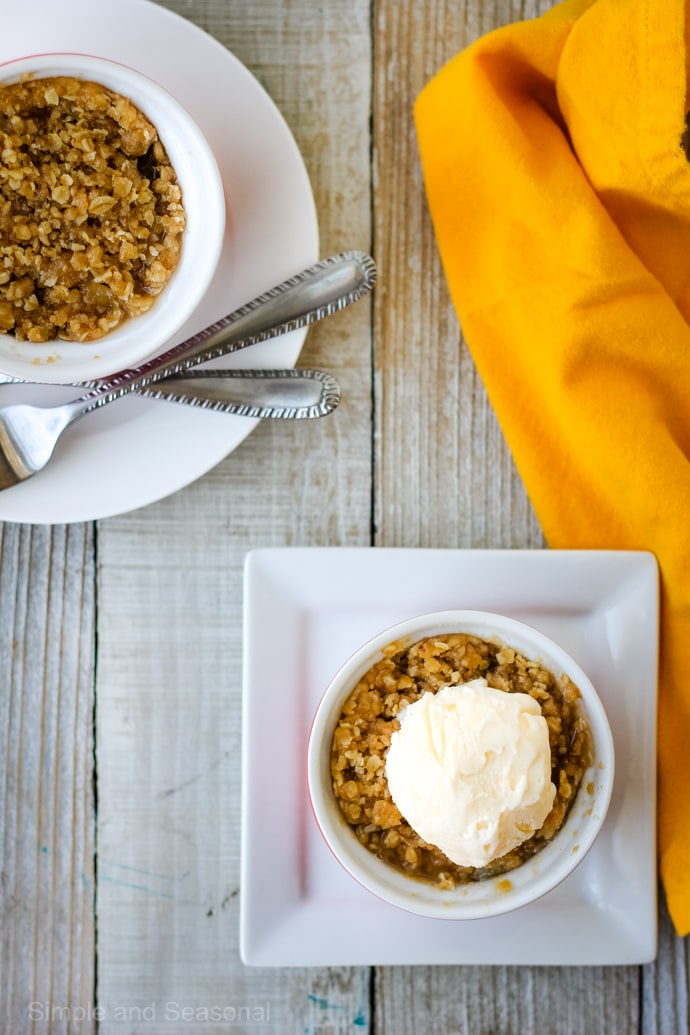 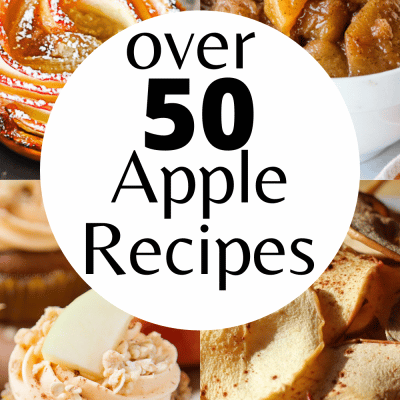 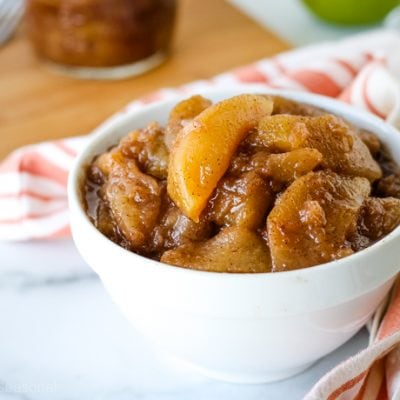 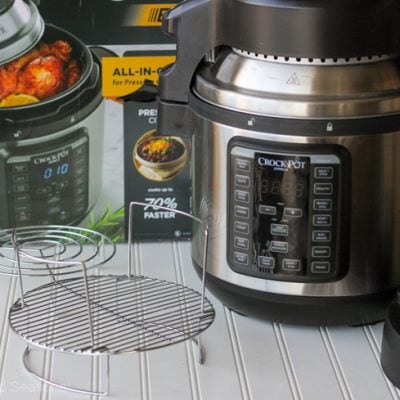 How to use the Crockpot Express Crisp