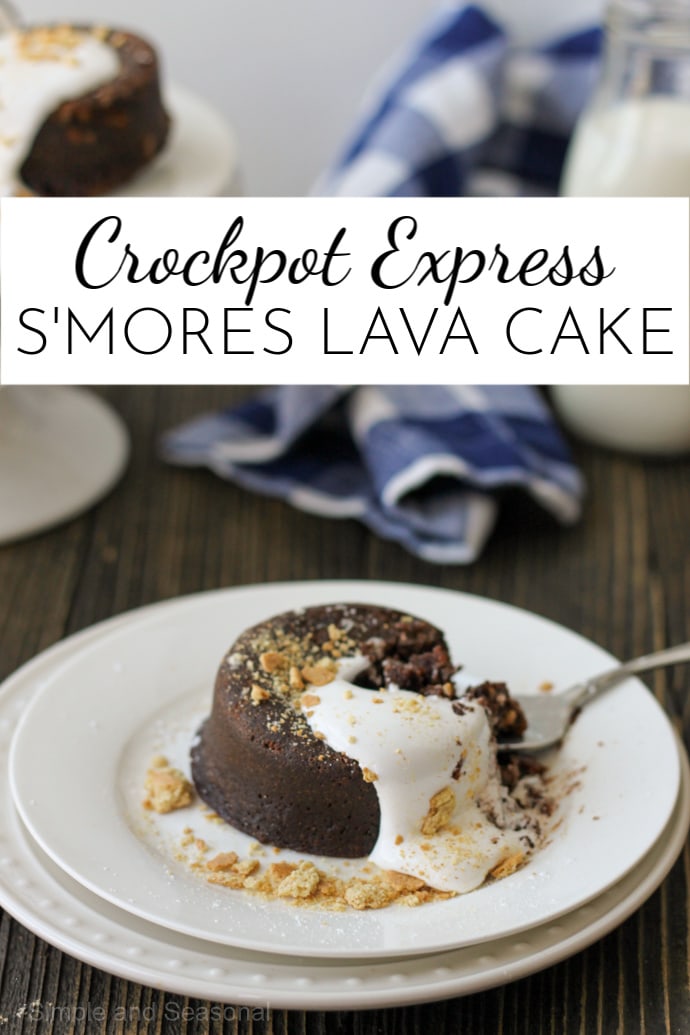 Lava Cake is one of those throwback recipes similar to fondue or jello molds. But I don’t see how anything with a molten chocolate center can ever go out of style, really. Besides, I was just watching an episode of Food Network’s Spring Baking Championship and they had an entire challenge devoted to making lava cakes! I decided it was time to give it a try in the pressure cooker, but added a twist and came up with Crockpot Express S’mores Lava Cake.

These chocolate lava cakes have the typical molten center, but with the addition of marshmallow creme inside and on top, they go from old-fashioned to AMAZING. There’s just a hint of graham cracker in each bite, and the gooey marshmallow gives me heart eyes. <3 Serve them up with a glass of milk for a rich and decadent summer dessert. 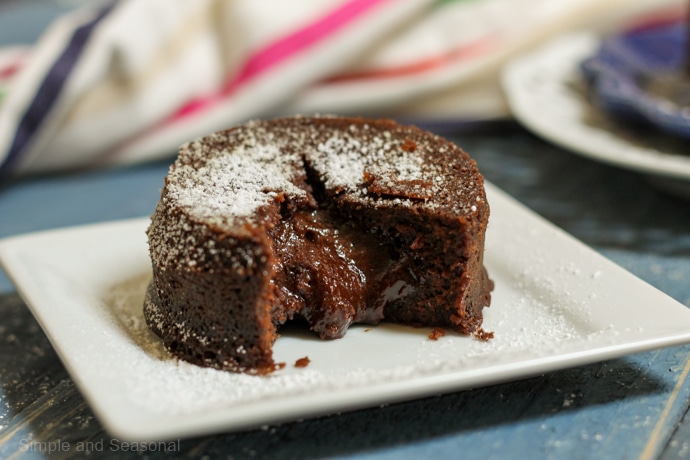 I started with a basic chocolate lava cake recipe from Eazy Peazy Mealz that I changed just a bit (I prefer using baking chocolate bars like Baker’s to regular chocolate chips) and then I played around with the recipe a few times to create the S’mores Lava Cake that’s perfect for making in the Crockpot Express. 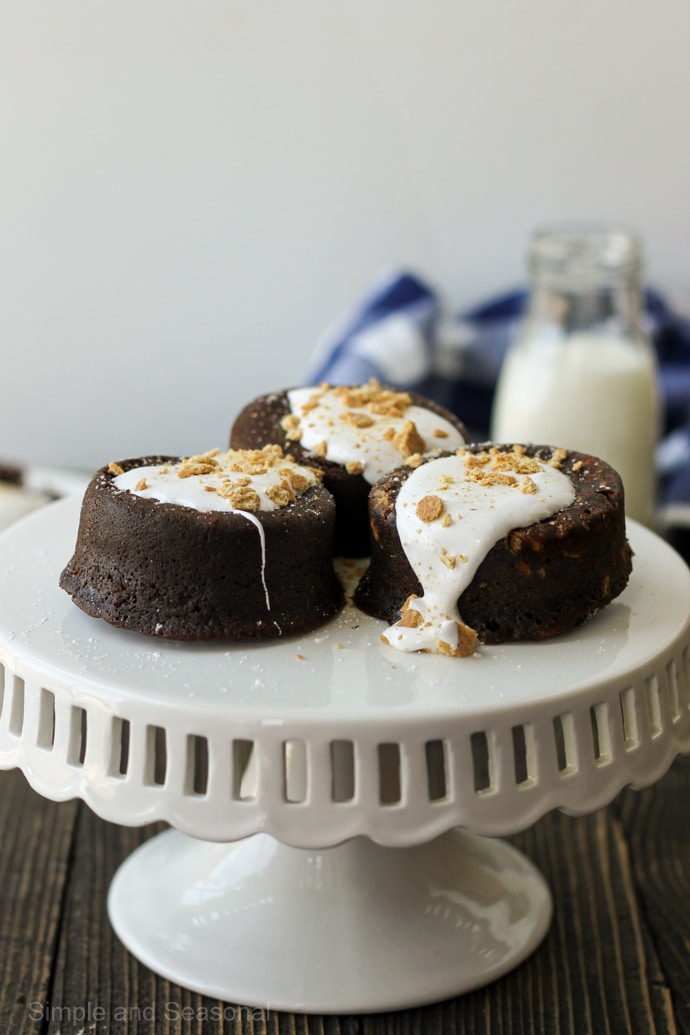 This recipe makes a total of 4 lava cakes if using the standard 6 ounce ramekins. You don’t really want to do more than that at once, or the cooking time and quality of the cakes changes. You really don’t want to make fewer than that, either. Four seems to be the magic number, at least in all the different versions I tested. 🙂 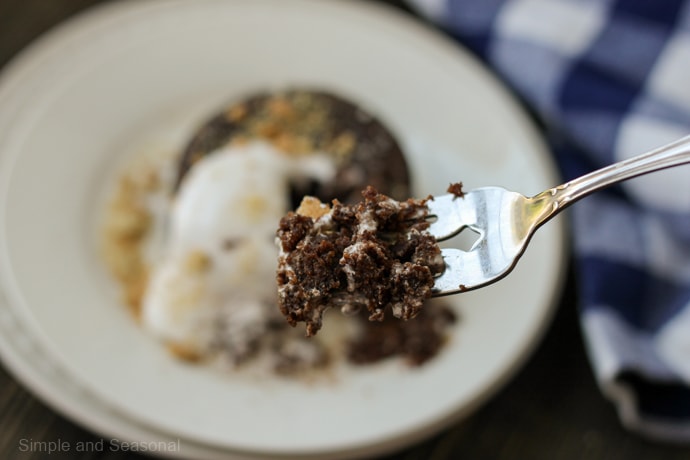 For best results, serve the Crockpot Express S’mores Lava Cake right away. You can reheat and serve them later, but the texture changes a bit with microwaving and the molten center will cook through. You’ll end up with just a basic chocolate cake. (Which isn’t terrible, but it’s not what we’re going for here, right?) 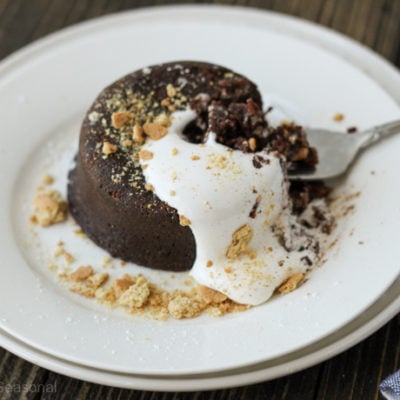 For a regular chocolate lava cake, replace the 3 tbsp of graham crackers with 3 tbsp of flour and eliminate the marshmallow creme. Cook as directed and serve topped with powdered sugar or ice cream!  This recipe was tested in a 6 quart Crockpot Express using standard porcelain 6 ounce ramekins. For an 8 quart cooker, use 1 1/2 cups of water and the 4 ramekins should nestle right next to each other inside the pot. Cook time may be a bit less. Start with 7 minutes and adjust as needed.

The fact that you can have a cake made from scratch and ready to eat about 30 minutes from start to finish is pretty cool. My boys happily gobbled up all the different test versions of this recipe. The spongy outer layer holds up well against the gooey insides and the semi-sweet chocolate is just perfection. Try it. You’re gonna love it.

If you like s’mores as much as I do, you’ll want to check out more than just Crockpot Express S’mores Lava Cake! I have quite a list of past recipes featuring the delicious combination of graham crackers, chocolate and marshmallows!

Don’t forget to pin this for later! 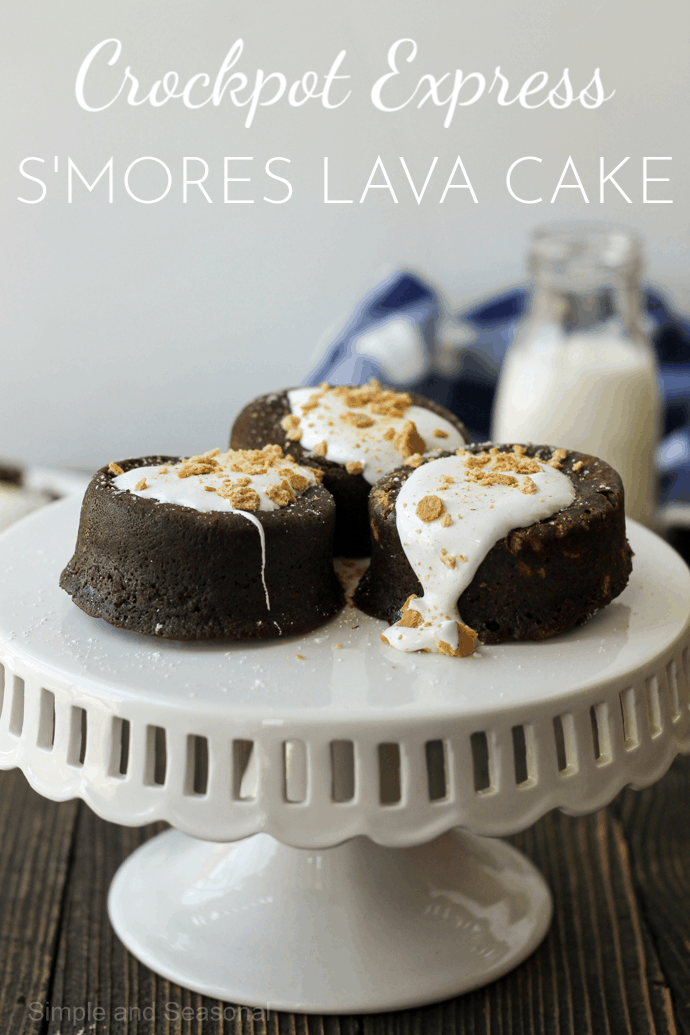