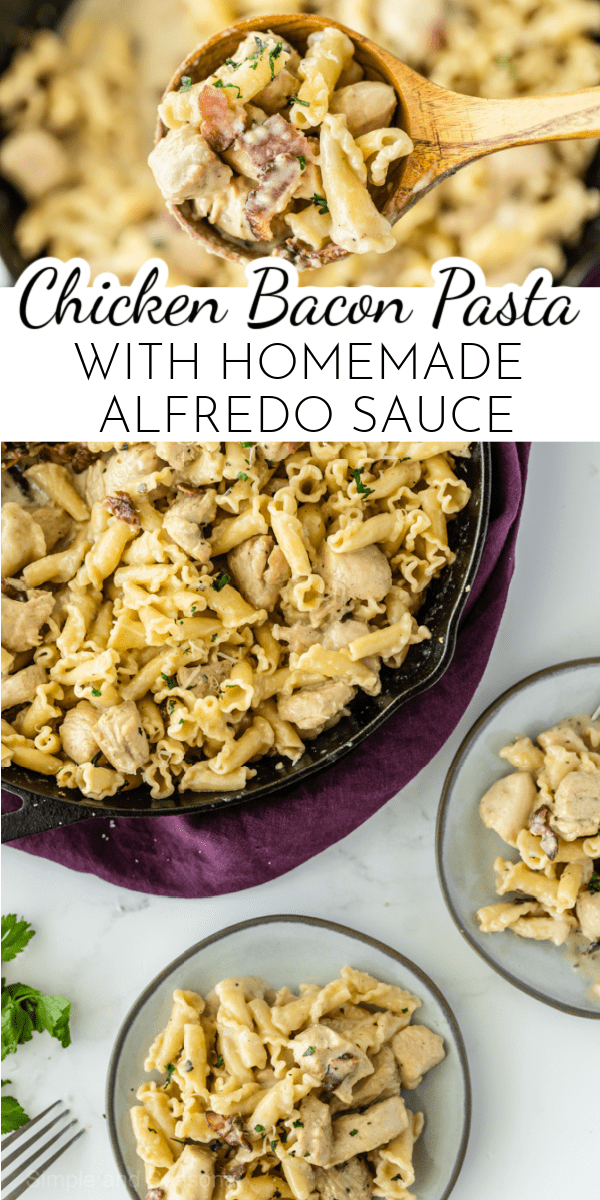 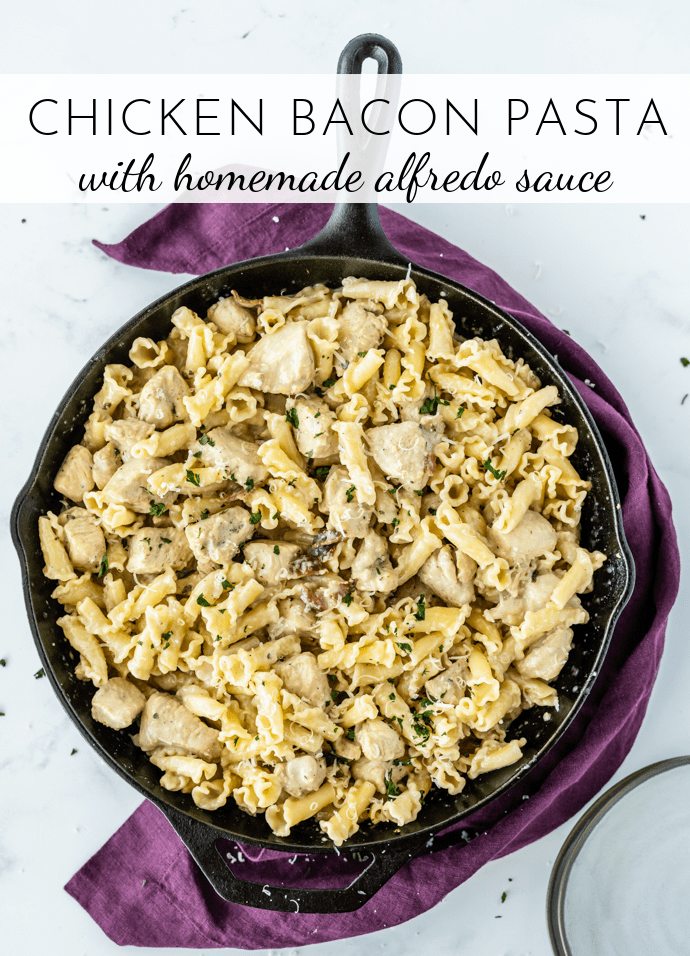 Have you ever had a recipe that was born of desperation? I wanted something different from the same old pasta dishes that we usually have, so I started throwing things into a skillet and that’s how Chicken Bacon Pasta was created!

Honestly, there’s nothing new about the combination of chicken and bacon. But when you add it to my easy homemade alfredo sauce, it turns into something a little bit magical. 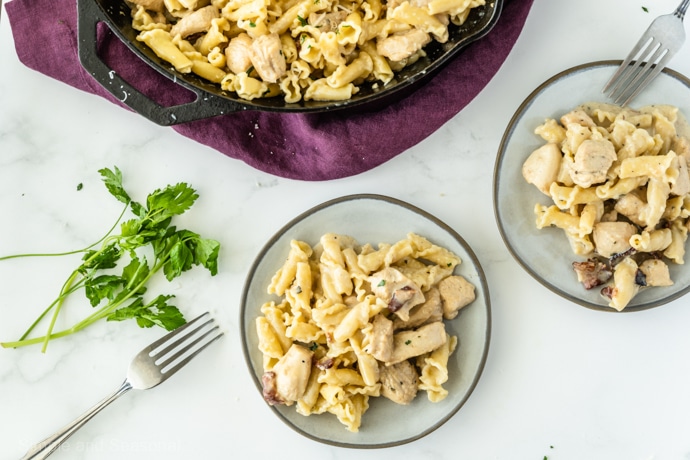 The first few times I made this recipe, I used jarred alfredo sauce. It’s certainly a bit faster to do that, but the flavor of this homemade sauce is just SOOOOO much better. I’ve also used jarred sauce to help stretch my homemade sauce a bit.

Just promise that you’ll try it at least once with homemade alfredo sauce. You don’t even need that many ingredients to make it! 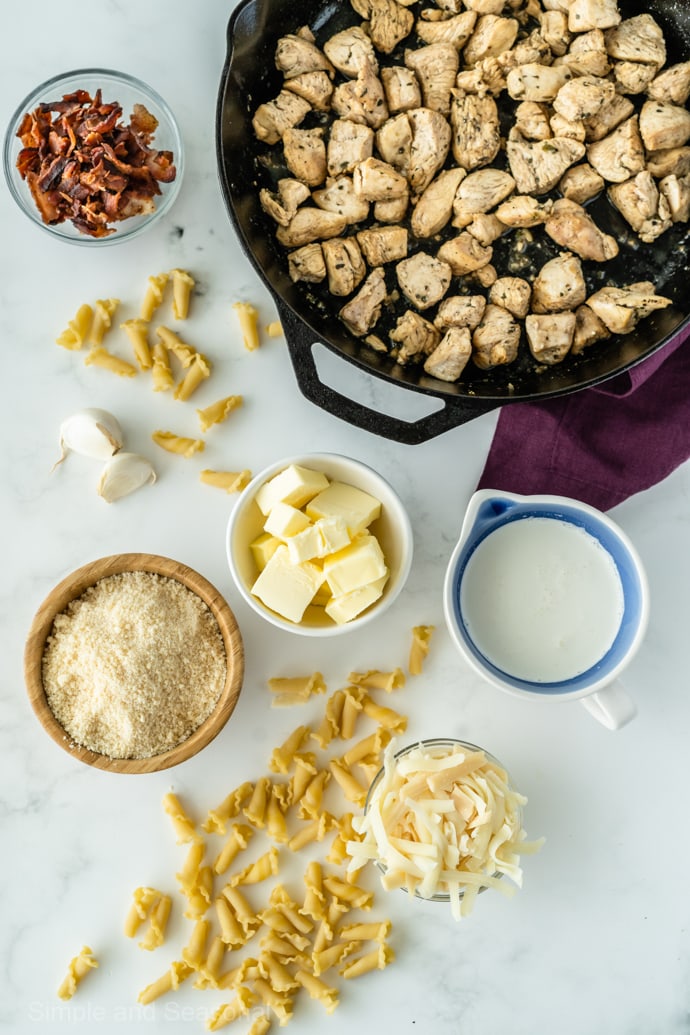 I try to keep heavy cream in my refrigerator all the time. If I have that and some Parmesan cheese, I know I can add some great flavors to any dish! I’ve also started keeping bacon in the freezer all the time. If I’m running low on groceries, I usually have enough on hand to make some Chicken Bacon Pasta. 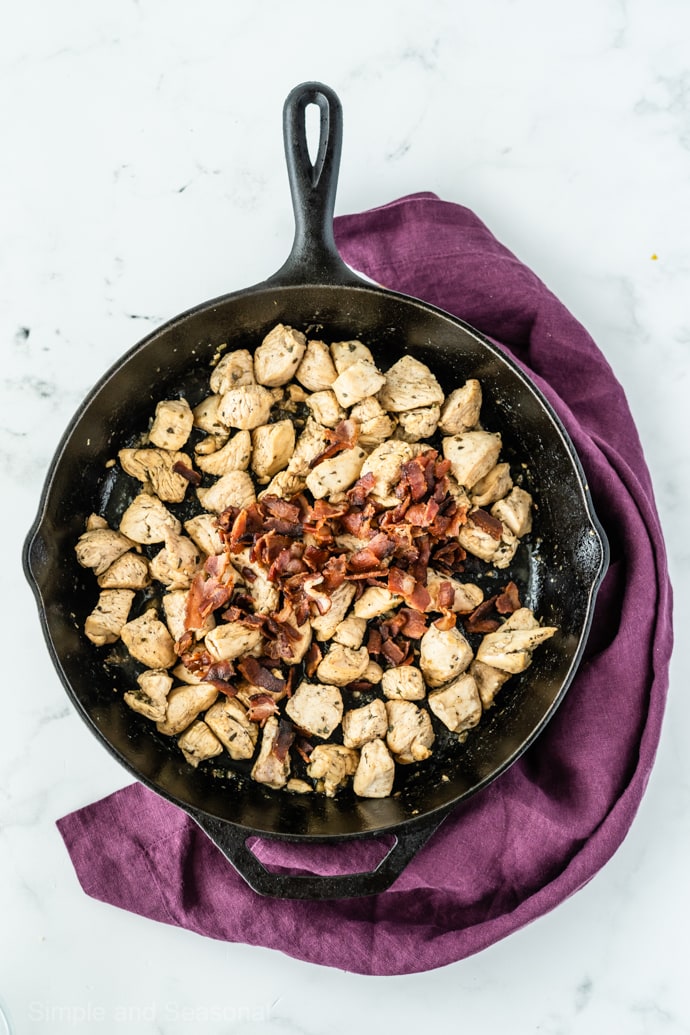 Start by cooking the bacon in a skillet and setting it aside to drain. If there’s a lot of grease in the pan, you can pour some of it off, but save a little bit of bacon grease for cooking the chicken breast!

Cook the chicken breast, garlic and spices together in the pan and then add the bacon back into the skillet. 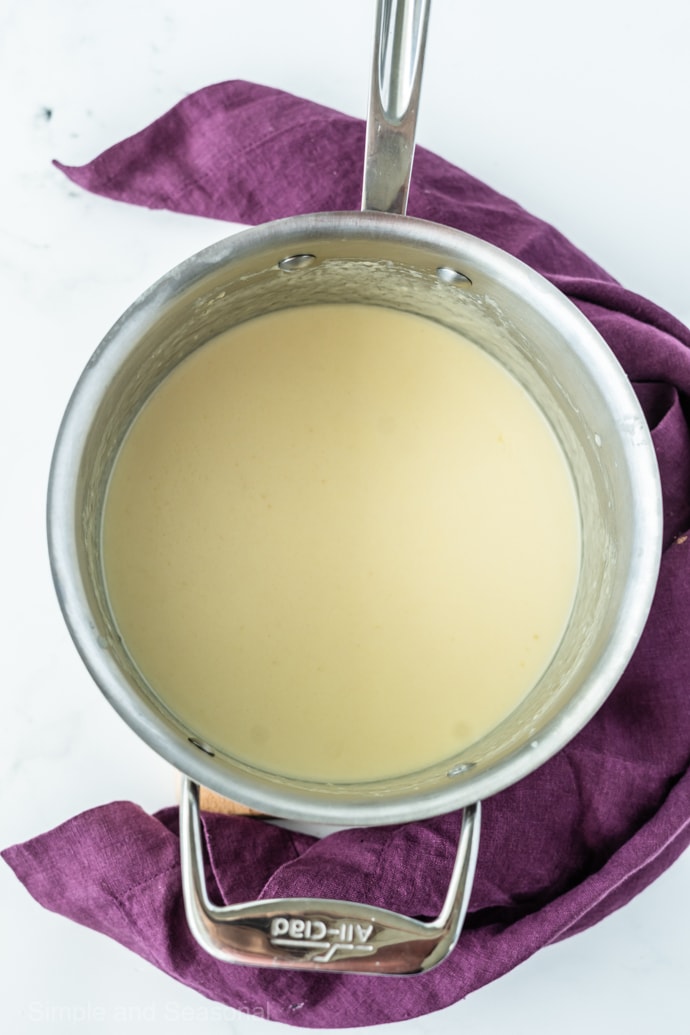 In a separate pot, add the butter and cream. This can be cooking while you’re working on the chicken. After the cream and butter has simmered for a bit, then add the cheese and simmer for a couple more minutes. 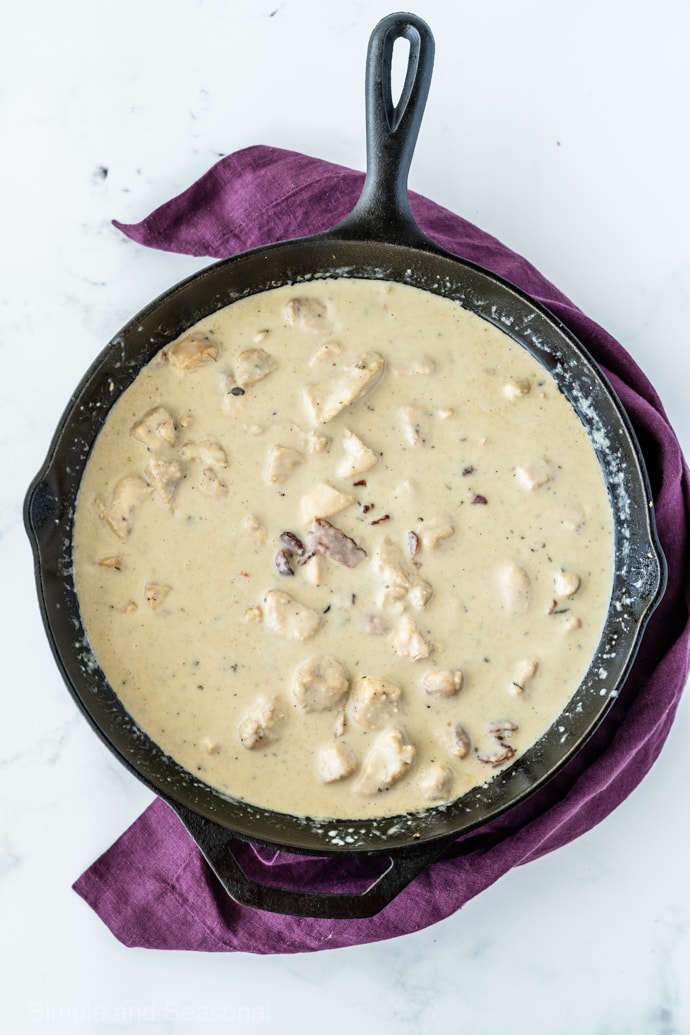 When the alfredo sauce is done, pour it into the skillet with the bacon and chicken. Let it simmer together for a few minutes. 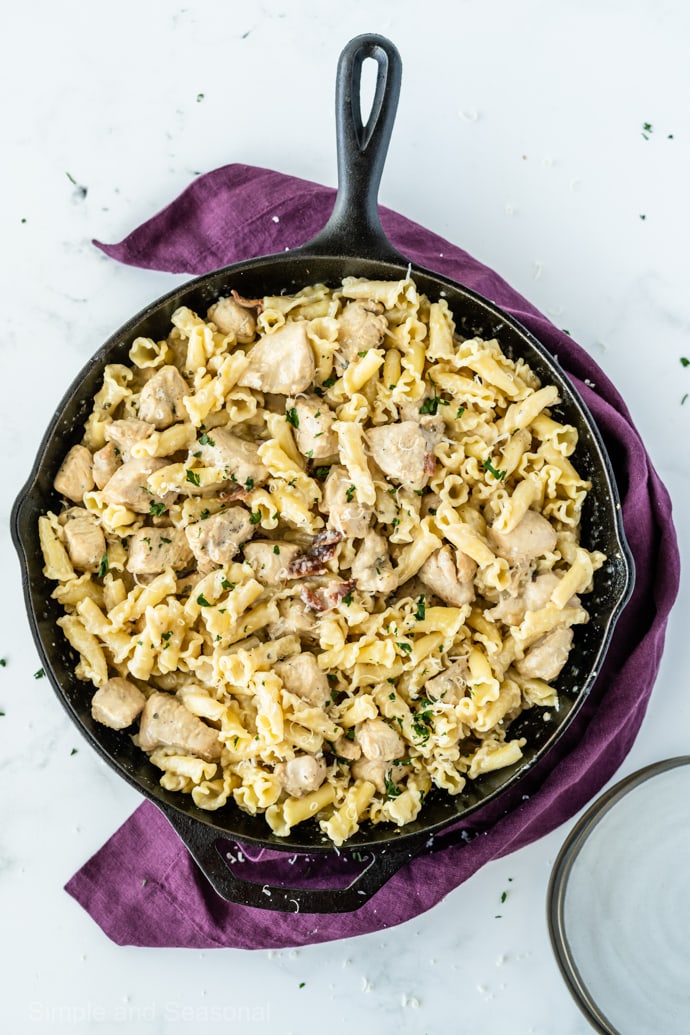 Stir in cooked pasta of your choice. I really like cavatappi pasta for this recipe, but rotini, bow tie, mini lasagna or penne all work great as well. Each one soaks up the sauce a bit differently, so go with what you prefer. 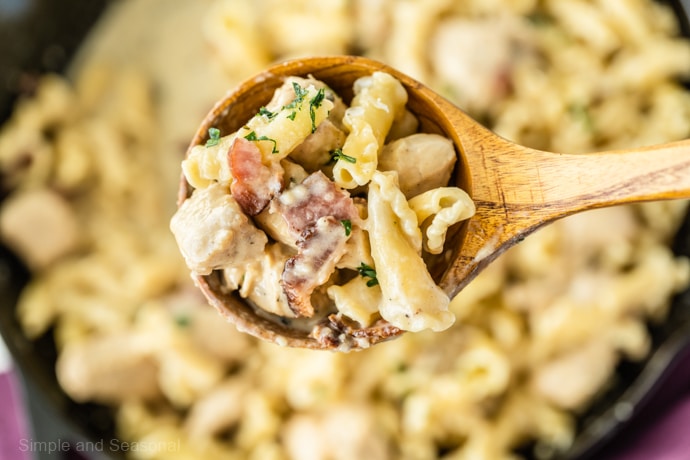 The rich, creamy sauce just works so well with the bacon and chicken! My kids gobble this up and then we enjoy leftovers for lunch the next day. If spaghetti night is getting a little boring, try changing things up with Chicken Bacon Pasta. You won’t regret it!

If you’re looking for something more “one pot” for pasta night, you should try One Pot Pasta made with kielbasa. It’s great for on the stovetop or in the pressure cooker, too. 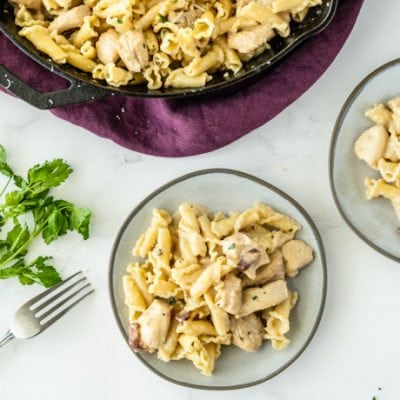 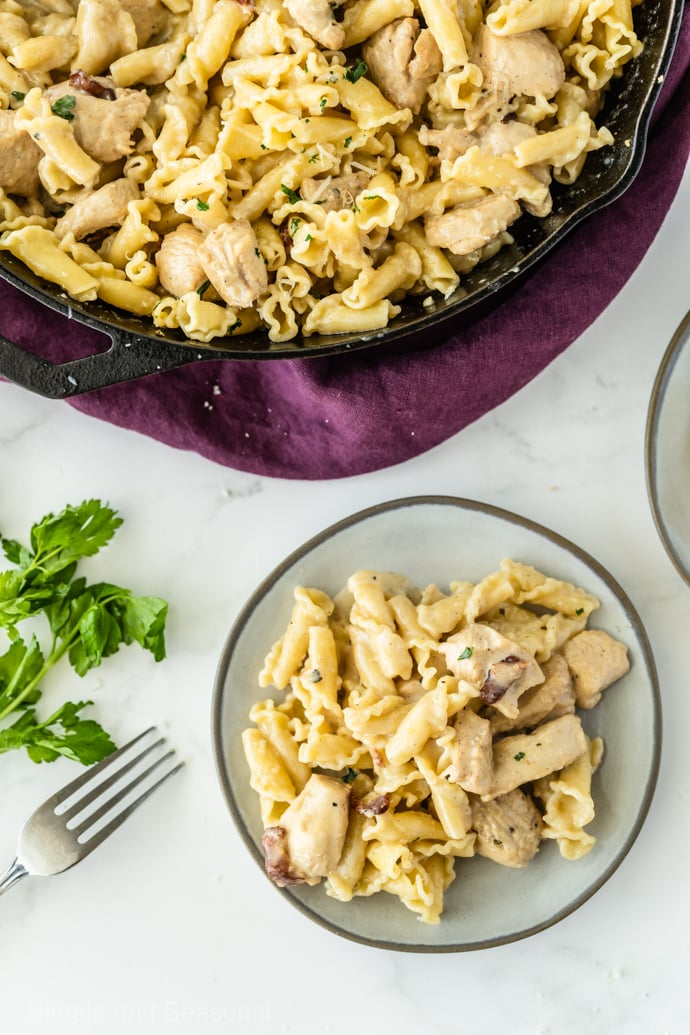